Over 180 leaders of the European rail supply industry gathered today in Amsterdam, The Netherlands on the occasion of the 2016 European Rail Industry Association (UNIFE) General Assembly.

The Netherlands has one of the most dense and highly used railway networks in Europe, with nearly all of its cities and towns connected by its nearly 7,000km of track (with the second highest percentage of track electrification in Europe). In addition to being one of the most rail-dedicated Member States of the EU, the UNIFE members selected The Netherlands as the location of their 2016 General Assembly due to the Dutch Government’s significant and continuous investment into its railway system and the current Dutch Presidency of the Council of the European Union.

This year’s General Assembly programme included presentations and commentary from industry CEOs and high-level speakers from the European Commission, the European Parliament (EP), the European Investment Bank (EIB), the Dutch Ministry of Infrastructure and the Environment, Shift2Rail and the European Union Agency for Railways. The event began with a series of keynote speeches delivered by Jocelyn Fajardo, (Member of Cabinet of EU Transport Commissioner Bulc), Martina Werner (Member of the EP and Rapporteur for the EP Resolution on the Competitiveness of the European Rail Supply Industry), Pim van Ballekom (Vice President, EIB), and Peter Hondebrink (Head of Unit for International, Safety, and Regulatory Affairs, Dutch Ministry of Infrastructure and the Environment).

The question of how the EU Institutions and Member States can best support the global competitiveness of the European rail supply industry dominated many of the discussions throughout the day. In fact, this General Assembly occurred only two weeks after the European Parliament’s adoption of a Resolution on the Competitiveness of the European Rail Supply Industry; which aims to bolster the industry with coordinated EU policy measures as it faces mounting industrial competition on European and global markets, especially from large Asian competitors.

Member of European Parliament Martina Werner (S&D, Germany) and vocal supporter of European rail supply industry competitiveness in the EP’s ITRE Committee, enunciated in her keynote address to the General Assembly: "Chinese and other companies expand quickly and, at the same time, barriers for European companies grow or remain high to access important foreign markets like the US, China and Japan. Therefore, it was the right time for the Parliament to direct its demands and recommendations to the Commission and Member States. I expect the Commission to react quickly to our political demands. That includes a permanent high level rail supply industry dialogue with all relevant stakeholders to keep the challenges of the industry in the spotlight."

During his keynote address, Jocelyn Fajardo, Member of Cabinet of EU Transport Commissioner Violeta Bulc, remarked “The Commission transport policy aims at making rail transport more attractive for EU citizens and businesses and at defending the global leadership of our railway industry. However, to achieve these ambitious goals we need the strong commitment of the rail sector itself, with additional investments in innovation, environmental friendly and interoperable technologies.”

UNIFE Chairman and President of Bombardier Transportation, Laurent Troger, addressed the opportunities and challenges of the European rail supply industry, commenting: “The European rail supply industry is very innovative, export-oriented, and ready to meet the world’s growing mobility challenges. Nevertheless, in order to do so we must have fair access to global rail markets which is increasingly not the case. UNIFE and its members are encouraged by the recent adoption of the European Parliament Resolution on the Competitiveness of the European Rail Supply Industry, but we must make sure that its recommendations are translated without delay into concrete actions.”

The UNIFE members have selected Barcelona as the location for the 2017 General Assembly which will take place from 21 to 23 June 2017. 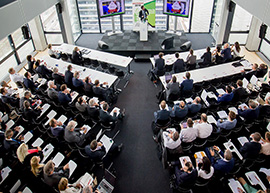