The 2019 European Railway Award was presented tonight to Catherine Trautmann, for her long-standing support of rail transport – including light rail in urban areas, high speed passenger lines and expanding the rail network across Europe in the framework of the European Union’s TEN-T Programme. The Award was handed over to Ms Trautmann by Philippe Citroën, UNIFE Director General, and Libor Lochman, CER Executive Director, during a special ceremony at the Royal Museums of Fine Arts in Brussels.

From the European Parliament, Karima Delli MEP (Greens/EFA, FR), Chair of the Committee on Transport and Tourism, underlined: “I am very happy to participate in the European Railway Award 2019. Rail is key to fighting climate change! As such, it needs fair competition with aviation and road. That is why it needs to be more inclusive!"

UNIFE Chair and CEO of Siemens Mobility, Sabrina Soussan, praised the laureate’s significant contributions to the sector and commented: “As transport volumes grow, rail becomes ever more important as an integral part of a sustainable mobility system. The upcoming EU budget should reflect this and make the digitalization of EU railways a priority both through the Connecting Europe Facility and Shift2Rail 2 - because with digital technologies, we increase the capacity of our rail network, secure full availability of its assets, enhance passenger experience, and thus strengthen our rail networks and Europe’s transport sector altogether. “

CER Chair and CEO of SJ and President of ASTOC Crister Fritzson congratulated the laureate and took the opportunity to emphasise that “Ms Trautmann has shown that policy makers can clearly make a difference, with dedicated actions based upon an understanding of the versatile nature of rail transport, and thereby the different settings, challenges and needs facing urban rail services, long-distance passenger services – be it high speed or conventional trains - and last but not least the rail freight business”.

Matthias Ruete, recently appointed European ERTMS Coordinator, congratulated the laureate and said: “ERTMS will be the backbone of digital rail. We need to roll it out rapidly.”

When accepting the European Railway Award for 2019, Catherine Trautmann commented: “I am honoured to receive the 2019 European Railway Award, expressing a recognition by the sector of my long-standing support to the development of the European railways and sustainable mobility system. I chose to dedicate the prize money to a project of the European Disability Forum, that will help creating a Europe wide database to signal accessibility issues in the different transport modes. My belief and learning from past projects is that integrating accessibility into the design of urban and long-distance rail transport is a motor of innovation. That is exactly what is needed to keep the rail sector at the forefront of the future mobility system!”

As Mayor of Strasbourg, Ms Trautmann initiated the creation of the Strasbourg tramway (inaugurated in November 1994), and advocated for the construction of a high-speed rail line between Paris and Strasbourg. As a Member (and a Vice-President) of the European Parliament’s Committee on Industry, Research and Energy from 2004 until 2014, Ms Trautmann supported policies to foster the growth of Europe’s rail supply industry. Since October 2014, as European Coordinator for the North Sea–Baltic Core Network Corridor (part of the EU’s Trans-European Transport Network or TEN-T), Ms Trautmann has played a leading role in forging an agreement between the European Commission and five EU Member States to implement the Rail Baltica project.

The award was accompanied by a donation of €10.000 to the charity of the laureate’s choice. Catherine Trautmann decided to give her prize money to the European Disability Forum - an NGO founded in 1996 that defends the interests of 80 million Europeans with disabilities.

First organised in 2007, the European Railway Award celebrates and recognises the political and technical contributions of accomplished individuals to the rail sector. The ceremony for the 2019 Award was followed by the joint CER-UNIFE Annual Reception and attracted more than 500 guests from all over Europe, including politicians and transport stakeholders. 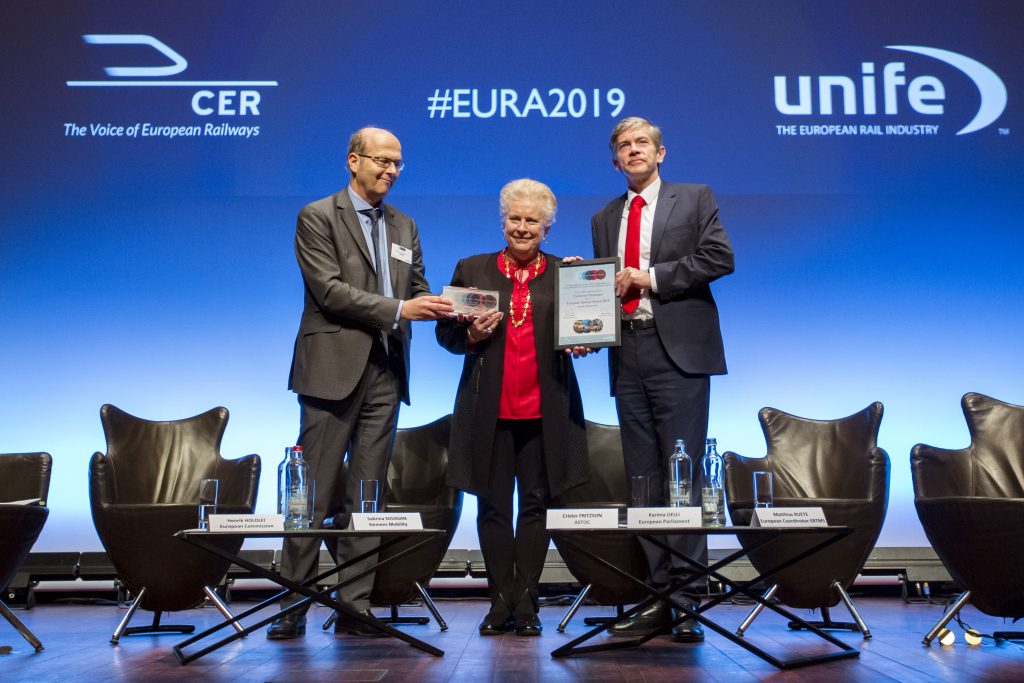