Employing 400.000 people throughout the EU, the European rail supply industry is one of Europe’s flagship industries and currently leads the global market for rail equipment supplying approximately 46% of the world market for rail supplies. In fact, the Resolution adopted today stresses the “importance of the rail supply industry for European industrial growth, jobs and innovation, and of its contribution to the achievement of the 20% reindustrialisation target.”

In particular, the Resolution aims to foster a level playing field on the global market for rail equipment and acknowledges the fierce competition coming from Asia: “third-country competitors, especially from China, are expanding rapidly and aggressively into Europe and other world regions, often with strong political and financial support from their country of origin…such practices may constitute unfair competition which threatens jobs in Europe.”

UNIFE (the European Rail Supply Industry Association) applauds the adoption of this bold Resolution and thanks the MEPs and especially the European Parliament’s Industry Committee (ITRE) and the Resolution’s Rapporteur, Martina Werner, for this initiative. UNIFE Director General, Philippe Citroën, remarked, “As this well-timed Resolution aptly points out, European rail supply manufacturers are under significant competitive pressure from emerging Asian industrial giants on global and now even on European markets. Meanwhile, these new competitors’ home markets continue to become less and less accessible to European companies, putting this job-creating, innovative and export-oriented European industry at a significant competitive disadvantage. UNIFE greatly appreciates the support of Ms Werner and the European Parliament for acknowledging this threat and proposing these astute policy recommendations to reinforce one of Europe’s flagship industries. We hope that Industry Commissioner Bieńkowska will take note of the strong messages voiced by the MEPs this morning in support of our industry and we expect the Commission to put in place a structured industrial dialogue in the coming weeks to follow up on this Resolution.” 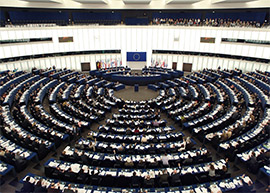