The Cooperation Council for the Arab States of the Gulf – the Secretariat General (GCC-SG); the Association of the European Rail Industry (UNIFE), the European Union Agency for Railway (ERA), and the International Union of Railways (UIC), have bi-laterally signed Memorandum of Understandings (MoUs), in presence of representatives of the European Commission, on 1 December, 2017 at the International Union of Railways (UIC) head offices in Paris to further mutual cooperation in different fields of rail transportation.

Messrs.: Khalifa Said Al Abri, Assistant Secretary General for Economic and Development Affairs of the GCC-SG, Philippe Citroën, Director General of UNIFE, Josef Doppelbauer, Executive Director of ERA, and Jean-Pierre Loubinoux, Director General of UIC have commented, "GCC-SG, UNIFE, ERA, and UIC are delighted to further strengthen the cooperation between the parties and to share railway expertise. The 6-Gulf Member States constitutes a priority region for UNIFE, ERA, and UIC members, with considerable investments foreseen in rail. Today’s MoUs builds on a solid and well-established cooperation with the GCC-SG, which started years ago. With this agreement, our organisations will be able to work even closer and exchange on important topics such as the European Rail Traffic Management System (ERTMS)."

The MoUs between UNIFE, ERA, UIC and the GCC-SG aim at facilitating exchanges and developing joint activities in order to achieve a favourable context for the development of railway projects in GCC Member States. It includes the exchange of information and expertise, cross-participation at events or joint organisation of events on market developments for freight and passenger transport, International, EU and GCC railway standards, interoperability of rail networks on cross- border corridors, deployment of the European Rail Traffic Management System (ERTMS), the International Railway Industry Standard (IRIS) quality scheme, policy and regulations; rail industry and manufacturing; and important institutional and capacity building.

The MoUs also builds on the institutional and regulatory dialogue already established between the GCC-SG and OTIF under the signed MoU between the parties. 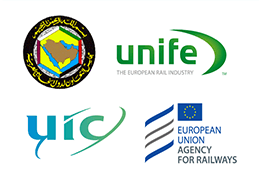