The 2021 European Railway Award was presented today to the iLINT project – the first commercial operation of fuel-cell-powered passenger trains – for providing a viable emission-free alternative to diesel on non-electrified networks. The Award was bestowed virtually during an online edition of the annual ceremony, marking the rail sector kick-off to the European Year of Rail.

Greeted by Philippe Citroën, UNIFE Director General and Alberto Mazzola, CER Executive Director, hundreds of participants from across Europe joined for the special edition programme, which honoured an outstanding political contributor and citizen’s initiative, in addition to the official Award voted by the jury.

The accolade of ‘outstanding political contributor’ went to European Parliament President David Sassoli for his leading role in the 4th Railway Package, aiding in the removal of the remaining legal, institutional and technical obstacles to creating a single European railway area. Speaking live from the European Parliament, President Sassoli said: “Europe is facing an unprecedented climate emergency. We all need to do more to build a more sustainable society. And one of the ways to solve this complex equation is the development and consolidation of a sustainable, intelligent and safe means of transport: the railway.”

Introducing this special ‘Year of Rail’ edition, European Transport Commissioner Adina Vălean highlighted: “There is no doubt that railways will be central to building a future for a transport system that is smart, sustainable, safe and resilient. With the European Year of Rail, we want to shine a light on the many benefits of rail transport, and continue the necessary reforms and investments to make it the first options for our European citizens and businesses.”

Commissioner Vălean was joined for a round-table discussion on the theme of ‘The resilience of rail’ by European Parliament and rail sector representatives. Member of the European Parliament Anna Deparnay-Grunenberg said: “The Year of Rail is a fantastic chance to push rail as the green and innovative backbone of our transport system in Europe. To deliver tangible improvements for passengers and good travelling by rail, we want to promote investments in modern and digitalised rail infrastructure, improve data sharing and ticketing, create a real night train network in Europe, and ensure a level playing field between the different modes of transport. The new rail connectivity index will help us to identify gaps in our European rail network and direct new investments to where they are most needed. The national Recovery and Resilience Plans under NextGenerationEU will play a significant role in delivering these investments.”

CER Chair and CEO of ÖBB Andreas Matthä took the opportunity to underline: “The strength of the rail sector, which was impressively demonstrated during the COVID crisis last year. However, due to dramatically reduced passenger numbers and changing freight volumes, many companies are now facing economic challenges. Now is the time to create the framework conditions at national and European level for fair competition between all modes of transport. Under improved conditions, the rail sector can successfully fulfil its role as the backbone for the European Green Deal.”

At the heart of the event was the announcement of the 2021 European Railway Award, which the jury elected to present to the iLINT project. Resulting from a highly fruitful collaboration between Alstom and the public transport authority of Lower Saxony (LNVG), the Coradia iLINT is the world’s first passenger train for mainline operation powered by a hydrogen fuel cell. The project proves that alternative technologies can offer the same level of performance without generating greenhouse gasses and proves that a completely emission-free railway system is possible, enabling rail to remain the most environmentally-friendly land transport mode.

Carmen Schwabl, Managing Director of LNVG, expressed her and the LNVG team’s appreciation for the award, stating: “It is not typical that a public transport authority initiates and accompanies a technological development of this scope. However, innovation is a break with the typical to create something ground-breaking. With our partners, during the test phase, we achieved a real world premiere in passenger service – right here in Lower Saxony.”

The project specifically targeted low-density networks where previously, due to the high deployment and maintenance costs of traditional electrification, diesel was the only propulsion technology available for rail transport. After a successful pilot, LNVG will now replace its diesel fleet with one completely composed of fuel cell trains starting in 2022. Moreover, other operators and networks across the world are following in their footsteps with new confidence in fuel cell technology. As such, the project achieved a breakthrough in the pursuit of fully decarbonised rail transport.

The award was accompanied by a donation of €10,000 for the charity of the laureate’s choice. LNVG decided to give the prize money to the children’s charities SOS-Kinderdorf e.V. and SOS-Mütterzentrum Salzgitter.

UNIFE Chair and CEO of Alstom Transport, Henri Poupart-Lafarge, commented: “Congratulations to LNVG for this very well-deserved award. This breakthrough project introduced the world’s first fuel cell passenger train in commercial service, thanks to the foresight and commitment of the Land of lower saxony and LNVG, together with the operator EVB, This has both demonstrated the innovation potential of the European rail industry and shown that replacing diesel engines with emission-free solutions is possible, contributing to rail transport’s decarbonation and to Europe’s climate neutrality objectives.”

In a year dedicated to bringing railways closer to citizens, author-activists Vincent-Immanuel Herr and Martin Speer were recognised for their ‘outstanding citizen’s initiative’: the FreeInterrail movement. Their efforts, culminating in the successful DIscoverEU scheme for young people to discover Europe by train, have made rail travel a dream for young people once again and instilled a new fascination for Europe in the next generation: “We are honoured and grateful. The special acknowledgment for #FreeInterrail proves that citizens' and passengers' engagement matters. Ideas move Europe forward and help to make our continent more sustainable, inclusive and interconnected. We believe in the power of train travel. Trains connect people, ideas, and potential. They help our continent to unite and progress – together.”

The Portuguese Presidency of the Council of the EU delivered this year’s closing remarks, delivered via video message by Minister for Infrastructure and Housing Pedro Nuno Santos: “After being in this job as Minister for Infrastructure and Housing for almost two years, I now understand why trains and railways generate such passion and enthusiasm from so many people. The unmatched capacity of the railways to move large quantities of people and goods comfortably, reliably, quickly and efficiently is essential to the fight against climate change and to the strengthening of our communities. I consider myself lucky to have the EU presidency during the first half of the European Year of Rail. It is an opportunity to advance the standing of the railway sector across the continent, and I shall try not to waste that opportunity.”

First organised in 2007, the European Railway Award celebrates and recognises outstanding contributions to the rail sector. The ceremony for the 2021 Award was the first ever online edition and attracted more than 600 guests from across Europe, including politicians and transport stakeholders.

More information can be found: 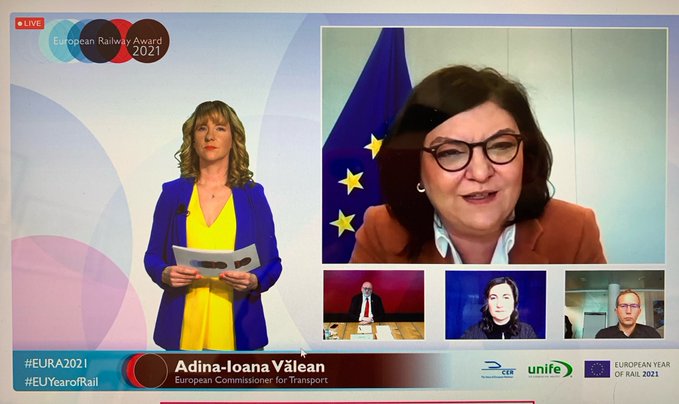