Interoperability and Standards – Driving an Efficient and Attractive Railway System

Witnessing the quantifiable, mounting effects of climate change, the European Union has set itself to being carbon neutral by 2050 – rail will need to become the backbone of a sustainable mobility paradigm to achieve that goal. This will require our railway systems to improve their interoperability and competitiveness against other modes to inspire a shift in end user behaviour, as called for by the EU Green Deal’s objective of doubling both high-speed passenger and rail freight traffic by 2030 and 2050, respectively. To instigate this essential conversation, UNIFE convened high level representatives from the European institutions and industry leaders for a digital event on 29 June, as part of its year-long 2021 European Year of Rail discussion series, to assess the achievements, on-going developments and long-term objectives of the technical framework of the European railway sector - addressing topics such as the TSIs, Standards, the Fourth Railway Package and the Single European Railway Area.

Convening a panel composed of representatives from the European Union Agency for Railways (ERA), CEN & CENELEC, FOD Mobiliteit en Vervoer / SPF Mobilité et Transports Belgium, and Alstom, panellists agreed that the progress made in rail regulation and standardisation and elevating ERA into the European authorising entity for vehicle authorisations have provided a solid basis for both increasing European interoperability. This will allow for the swift implementation of green transport solutions across the European Union and increased competitiveness of rail both in Europe and globally. The event, moderated by Chris Jackson, Editor-in-Chief of Railway Gazette, highlighted the importance of streamlining technical requirements in a harmonious and stable fashion to best enable the European Rail Supply Industry to continue providing cutting edge products and deploying them swiftly for the benefit of Europe.

Josef Doppelbauer, Executive Director of the European Union Agency for Railways (ERA), explained: “Undoubtedly, a lot of progress has been made in rail standardisation over the past 30 years, but we are not yet at the desired situation. National Rules cause delay and cost in international rail transport - with the appropriate resource and funding provided to ERA, we could harmonise much more, and much quicker, in cooperation with National Safety Authorities”.

Elena Santiago Cid, Director General of CEN & CENELEC, asserted that: “The European Railway Sector, one of the major drivers of the European Economy, is strongly committed to European standardisation as an essential tool to contribute to the European twin digital and green transitions of railways”.

Clio Liégeois, Attachée Juriste at FOD Mobiliteit en Vervoer / SPF Mobilité et Transports Belgium and Chair of the ERA Management Board, stated: “The reduction of national rules in a Member State is not simply a matter of removing obsolete and forgotten standards. It is a real paradigm shift, aimed at empowering railway actors whose safety management system must take over choices previously made by government and railway authorities as to how best to ensure safe operation. This paradigm shift requires awareness and an improvement in the level of maturity of a sector that is sometimes very disparate. The challenges are therefore great to ensure that the reform will not jeopardise the level of safety on the rail network. In this context, the introduction of harmonised good practice at European and national level is the option to be followed”.

Nicolas Castres Saint-Martin, Chief Technology Officer at Alstom, shared that: “To drive an efficient and attractive railway transportation, its regulatory system must be stable, predictable and transparent. Standardisation is a key enabler to achieving the Single European Railway Area and one unique European railway system objective. It is built throughout a consensus, hence adopted and understood by the whole railway sector; that is its main strength”.

Philippe Citroën, Director General of UNIFE, concluded the session by reflecting on the need for greater interoperability: “The Fourth Railway Package has been a historic milestone in the harmonisation of Europe’s railways towards a Single European Rail Area. Continuing this work assures the global leadership of European rail suppliers and enables our Union to lead in the mobility solutions of the future.” 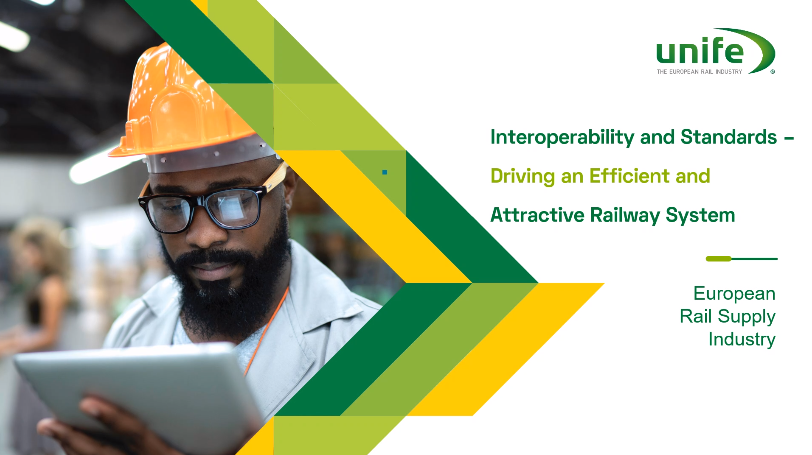