SECOND EU-JAPAN RAILWAY INDUSTRIAL DIALOGUE: THE MOMENTUM MUST BE MAINTAINED

On December 4, UNIFE Director General Philippe Citroën, as well as several UNIFE representatives, actively participated in the second meeting of the EU-Japan Industrial Dialogue on Railways in Tokyo. The Industrial Dialogue was organised by the European Commission and the Japanese government and aimed at facilitating exchanges on critical topics addressed in the EU-Japan Free Trade Agreement (FTA) negotiations, including market access issues, technical regulations and safety standards.

During a session on market access enhancement, the Japanese operators and Ministry of Transport (MLIT) presented their respective measures to guarantee transparency and non-discrimination as per the one-year package. Philippe Citroën reaffirmed that the one-year package on railways is only a first step towards achieving a level-playing field between the EU and Japanese rail markets, and that more progress needed to be made. It was also stressed that safety was a high concern not only in Japan, but also in Europe – which is reflected in the EU regulatory framework and in the products and services provided by the rail industry.

The Industrial Dialogue meeting was held at a critical point, since it will be directly followed by the eighth round of the EU-Japan Free Trade Agreement negotiations (8-12 December), during which the second phase of the negotiations on market access will kick off.

In the perspective of the implementation of the one-year package and of the continuation of negotiations, it is now crucial to ‘test’ the new contact points and information provided by Japanese operators (questions request for clarifications, initiation of registration procedure…). The involvement of UNIFE members will be necessary to maintain credibility and consistency in the negotiations. 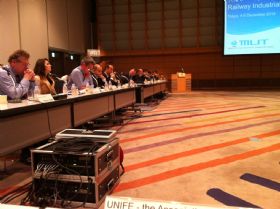