BRUSSELS—The European Rail Research and Advisory Council (ERRAC) met on November 4 in Brussels for their second biannual plenary meeting of 2014 to discuss the future challenges for rail research. This meeting was combined with the Foster Rail Mid-Term Event. One of the main highlights of the event was the official endorsement by the ERRAC plenary of the Strategic Rail Research and Innovation Agenda (SRRIA). Prepared by the FOSTER-RAIL partners over the past months, the document’s purpose is to guide and inspire future rail research and innovation over the coming decades and to reaffirm Europe’s need to offer a well-balanced, business-led and strong programme of research and innovation for the railway system.

The conference also hosted a number of speeches from important rail stakeholders including a presentation of the status of Shift2Rail and call for associated members by Mr Christos Economou, interim Executive Director of the Shift2Rail Joint Undertaking.

In addition, an interactive debate on the future challenges of ERRAC took place. This was a great opportunity to hear the expectations from the European Commission and different rail stakeholders. The output of this conference will contribute to the definition of the new ERRAC challenges and its role interacting with the other platforms and programmes for rail and other transport research in the future.

ERRAC Chairman Josef Doppelbauer (Bombardier Transportation) chaired the conference. He will continue to serve as ERRAC Chairman until the end of 2014. Mr Doppelbauer has recently been confirmed as the next Executive Director of the European Railway Agency where he will officially begin his mandate on 1 January 2015. The current ERRAC Vice-Chairman, Andy Doherty (Network Rail) will take over as interim Chairman from 1 January 2015 until the next ERRAC plenary in April 2015. A new ERRAC Chairman and two Vice-Chairmen will be officially appointed during the ERRAC April plenary meeting.

Josef Doppelbauer, Chairman of ERRAC, added: “It has been a pleasure working with ERRAC over the past two and a half years. The ERRAC platform is an invaluable input to rail research in Europe and the SRRIA identifies the key challenges that must be undertaken to reach the EU’s ambitious goals set out in the 2011 White Paper on Transport.”

FOSTER RAIL is a three-year project funded via the European Commission FP7 research programme. The project is coordinated by the International Union of railways (UIC) with the support of the European Rail Industry (UNIFE) and relies on the following partners:

Through FOSTER RAIL, the ERRAC website has been rejuvenated. The platform and the project are now presented at www.errac.org 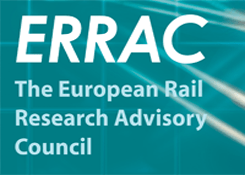