The Gotthard Base Tunnel Project wins the 2018 European Railway Award

The 2018 European Railway Award was presented tonight to the Gotthard Base Tunnel Project, for delivering the world’s longest railway tunnel, shifting freight to rail. Peter Jedelhauser, former Head of the Gotthard North South Corridor Project at SBB, and Renzo Simoni, former CEO of AlpTransit Gotthard Ltd accepted the award on behalf of the European workforce who brought the project to life.This is the eleventh edition of the European Railway Award, where, since 2007, the European rail sector has celebrated and recognised the political and technical contributions of accomplished individuals to the sector. The ceremony, which took place at the Square Meeting Centre in Brussels, was followed by the joint CER-UNIFE Annual Reception and attracted more than 500 guests from all over Europe, including high-level politicians and transport stakeholders.

The evening’s keynote speaker, European Commissioner for Transport, Violeta Bulc, highlighted how “the rail sector has a central role to play in the transition to integrated, smart and low emission mobility”. She invited all actors “to intensify their cooperation to improve the quality of service and to demonstrate the impact of public investments in rail transport infrastructure”.

Representing the European Parliament, MEP Karima Delli (Greens/EFA, FR), Chair of the Committee on Transport and Tourism, underlined “2018 is going to be a very challenging year for the rail sector at EU level. There is a common will between the European Commission and the European Parliament to promote passengers' traffic and freight, in order to decarbonise transports and to better connect European citizens. But this transition will only be possible if we implement the fourth railway package for the benefit of passengers and workers of the rail industry, and if passengers feel better protected by the passenger rights' directive that is being currently recast. Brexit will also be at the heart of the rail connectivity discussions given the European Union shares, under water, a rail interconnection with the British island. We have rich discussions ahead of us and I thank CER and UNIFE for setting up this new edition of the European Railway Award.”

Paweł Wojciechowski, European Coordinator for the Rhine-Alpine core network corridor, stated: “The European Coordinators are actively involved in the discussions on the next multiannual financial framework. Where the resources are scarce we should focus even more on their efficient use. The TEN-T and CEF policies follow this approach by allocating funding to projects with the highest European value added – such as cross-border rail projects. That enhances European integration, competitiveness as well as other goals such as decarbonisation. However we must also urge governments to commit more national resources in order to complete the TEN-T core network by 2030.”

UNIFE Chair and CEO of Siemens Mobility, Sabrina Soussan, stated: “We’re here to celebrate the achievements of our industry, and to look ahead at what’s going to be a crucial year for Europe’s rail sector. As the EU institutions decide on their budget priorities for the next years, we want to make sure that rail is firmly among those. Further investments in rail projects, and EU funding for crucial digital innovation in our sector through Shift2Rail 2.0, will secure Europe’s leadership and contribute to more efficient, innovative and interoperable rail transport.“

CER Chair and CEO of SJ and President of ASTOC Crister Fritzson congratulated the laureates and took the opportunity to emphasise that “the Gotthard base tunnel is an excellent example of a major infrastructure construction project that has lifted rail freight to the next level, unleashing the full potential for modal shift. Interestingly, partial funding also came from charges on heavy road vehicles. We need more projects like this, as well as incremental infrastructure investments and reinvestments, boosting rail services for both passengers and freight customers.”

The longest rail tunnel in the world, the Gotthard Base Tunnel, officially entered into service on 11 December 2016. The Gotthard Base Tunnel is an outstanding example of shifting freight transport to more environmentally friendly modes of transport, by relying on public support and a fair financing system. The tunnel is at the heart of Europe’s most important rail freight axis – the Rhine-Alpine corridor boosting rail freight traffic from Rotterdam to Genoa. Rail passengers are enjoying reduced travel times and more seats. From 9 000 daily passengers in 2015, the Gotthard passenger traffic is expected to nearly double to 15 000 daily passengers in 2021.

When accepting this award, Peter Jedelhauser, former Head of the Gotthard North South Corridor Project at SBB, commented: "Despite all technological and organizational achievements, human factors have once more proven to be one of the most crucial success factors.”

Renzo Simoni, former CEO of AlpTransit Gotthard Ltd, highlighted: “The great achievement is that, with the Gotthard Base Tunnel, we have a genuinely transalpine flat-rail route at our disposal. Even though it runs right through the middle of the Alps, at its highest point it’s only 550 metres above sea level.”

The award was accompanied by a donation of €10.000 to the charity of the laureate’s choice. Peter Jedelhauser gave his prize money to Stiftung Personalfonds SBB, and Renzo Simoni gave his to ARGO (Foundation for integration of people with disabilities).

Click here to fill in a short survey about the event and here to view the pictures from the event. 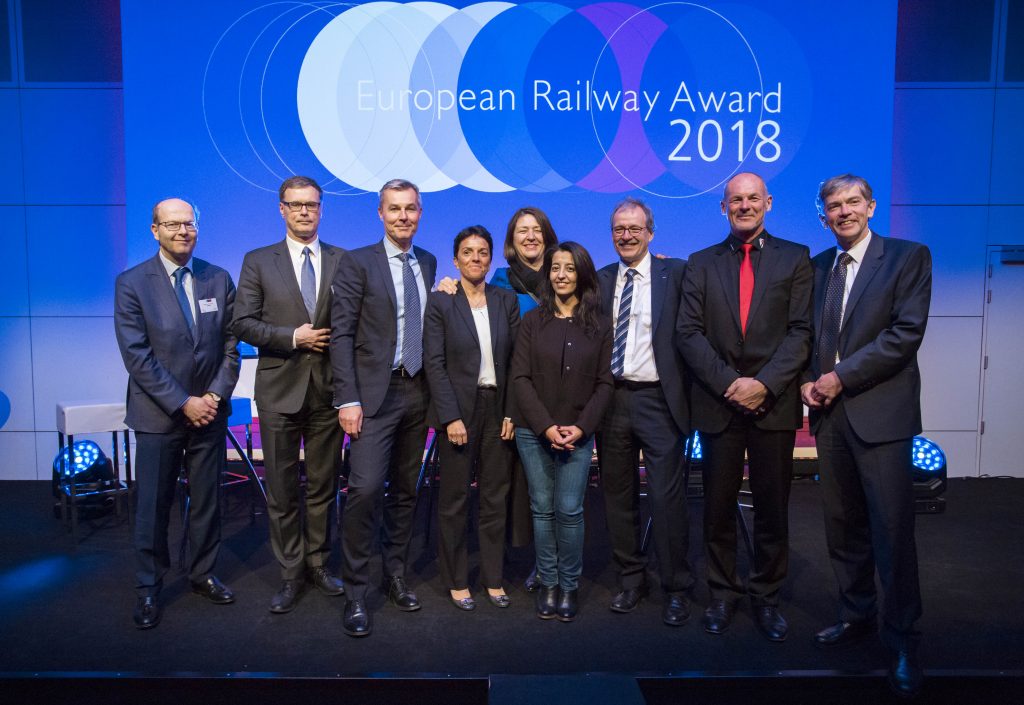