In the framework of the ongoing Latvian Presidency of the Council of the EU, Philippe Citroën met with the Latvian Minister for Transport Anrijs Matīss and his Under-Secretary of State for European Affairs Ilze Aleksandrovica. This meeting was the opportunity for UNIFE to convey the key messages of the UNIFE Presiding Board on two major topics: the Technical Pillar of the Fourth Railway Package and EU Investment Policy.

Regarding the Fourth Railway Package, Philippe Citroën reminded the Minister about the industry’s need for a quick adoption of the Technical Pillar and offered to support the Latvian Presidency in their efforts to find an acceptable compromise with the European Parliament on this issue.

Philippe Citroën also expressed to the Minister UNIFE’s hopes – but our valid concerns as well – concerning the new European Fund for Strategic Investments (commonly referred to as the Juncker Investment Plan). 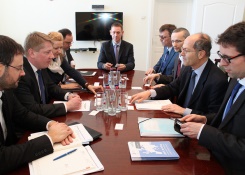