At the occasion of the inaugural European Rail Summit, organised by the Railway Gazette, UNIFE Chairman and President of Bombardier Transportation, Dr Lutz Bertling, addressed the audience rail stakeholders and European transport officials emphasising the importance of the speedy adoption of the Technical Pillar of the 4th Railway Package—indicating that it is the foundation for the competitiveness of the European Rail Industry.

Dr Bertling gave the opening speech for the afternoon session on the “4th Railway Package—Interoperability & Authorisation,” which included a panel discussion with high-level stakeholders from across the sector, including: Dr. Jochen Eickholt, CEO of Siemens Rail Systems and member of the UNIFE Presiding Board, Philippe Citroën, Director General of UNIFE, Marcel Verslype, Executive Director of ERA, Luc Lallemand, CEO of Infrabel, and Libor Lochman, Executive Director of CER. The panel discussion was moderated by Chris Jackson of the Railway Gazette.

In addition to addressing the need for urgent action on the 4th Railway Packages Technical Pillar, Dr Bertling warned about the growing threat of Asian rail competitors on both the EU and Global marketplace—especially in reference to China. Dr Bertling also reminded the audience that it is crucial that Shift2Rail Joint Undertaking for rail research and innovation receives a high level of attention from its stakeholders and that the founding members of the initiative would also like to encourage applications of candidates for associate membership (closing date for applications 12 November). Moreover, he stressed the need for Member States and rail stakeholders to work together to make the best possible use of EU funds that are available for investment in rail systems and made a special point on the need for Member States to deploy ERTMS within their national rail systems in an effort to progress towards a truly interoperable single European rail area. Finally, Dr Bertling urged the EU to implement binding measures on its climate and energy goals.

In conclusion, Dr Bertling stated: “We are at a turning point in the European rail industry where the successful steps of the recent past must be converted into the realisation of projects which will transform mobility in Europe – across the continent, within each country, and for urban areas in particular. As a representative of the European rail industry, I can say that we look forward to working with the new European Commission and the European Parliament, in particular its Transport Committee, for better rail transport in the future.” 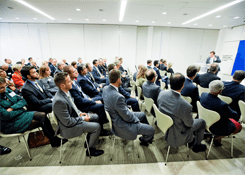