The UN’s 21st annual negotiations around climate change, COP21, is currently taking place in Paris (30 November-11 December) where world leaders have gathered and continue to gather to discuss the implications of climate change and what can be done to both limit climate change while still allowing for sustainable economic growth for developing and developed countries alike. Comprising about a quarter of energy-related CO2 emissions, transport is a major culprit in climate change, and as such, there is a great onus on transport leaders and stakeholders to propose and deploy solutions that reduce their environmental impact despite a growing demand for mobility. Rail transport meets 9% of the passenger kilometre/freight tonne kilometre demand worldwide while only emitting 0.7% of global energy-related CO2 emissions, while the other modes (notably road, aviation, and maritime) emit 22% of global energy-related CO2 emissions. It is obvious that rail is the most carbon-conscious and environmentally friendly mode of transport; which is why UNIFE took an active role in transport focused side events in Paris across the two weeks. Most notably, UNIFE sponsored and helped organise aspects of the UIC Train to Paris initiative as well as the Paris Process for Mobility and Climate (PPMC) Transport Day; but UNIFE also attended the Lima-Paris Action Agenda (LPAA) focus on Transport in the Blue Zone of Le Bourget (official premises of the COP21 negotiations) as well as several other COP21 side events across the two weeks of COP21.

Senior government officials and rail sector leaders from around the world gathered on the evening of 28 November at UIC Headquarters in Paris for the focal event of the UIC Train to Paris initiative. The initiative, coordinated by UIC and its members, and with the support of UNIFE, organised trains from around the world to transport senior transport and environment stakeholders to Paris by train the weekend before the beginning of the COP21.

UIC and UNIFE members joined UN officials, EU and government officials and journalists on the official trains coming from Rotterdam, Bonn, Brussels, Berlin, and Frankfurt. In particular, UNIFE Chairman Lutz Bertling (Bombardier Transportation) and Presiding Board Member Jochen Eickholt (Siemens) took the official Deutsche Bahn train from Berlin, while UNIFE Director General, Philippe Citroën took the official Thalys train from Brussels to Paris. UIC members also organised trains from Moscow, Milan, Vienna, and as far as Beijing and Ulaanbator, Mongolia. The message is clear: without significant action in transport there will be no way to meet the ambitious climate goals that are expected to be agreed upon during COP21. Member of the UNIFE Presiding Board, Henri Poupart-Lafarge (Alstom), spoke on behalf of UNIFE at a high-level panel during the Train to Paris focal event and commented that UNIFE and its members are committed to collaborating with rail sector stakeholders to deliver increasingly attractive and energy-efficient products to encourage modal shift to rail and support railways in their Railway Climate Responsibility Pledge, which was signed by the UIC members at the event.

The Lima-Paris Action Agenda (LPAA) is an initiative of the governments of France and Peru to demonstrate that the transition to low-emission and climate-resilient development is both urgent and feasible – and that this transition is already underway. A series of 12 high-level LPAA Thematic Focus events during COP21 are intended to highlight solutions that hold potential to accelerate transformational change.

The LPAA Transport Focus event provided a platform for governments to join with companies, cities, transport organizations and civil society to present collective initiatives to promote cleaner more efficient solutions with the aim to change the course of “transport as usual.” The Transport Focus event was organized around three primary sessions (urban mobility, freight and long distance transport, clean vehicles), which focused attention on the 15 transport initiatives linked to the Lima-Paris Action Agenda. This included the UIC ‘Low-carbon Rail Transport Challenge’, which UNIFE supports. Ségolène Royal, French Minister for Ecology, Sustainable Development and Energy, and Violeta Bulc, EU Transport Commissioner, were among the high-level speakers of this historic step towards increasing the visibility of sustainable transport and rail within the UNFCCC process. 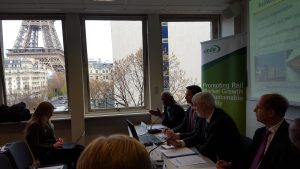 SLoCaT (Partnership for Sustainable Low-Carbon Transport) and the PPMC organised the 2015 Transport Day on 6 December at the UIC Headquarters in Paris. This event brought together around 400 transport stakeholders from around the world to present and debate sustainable mobility solutions. As a sponsor and member of SLoCaT and PPMC, UNIFE was present with a stand, but more importantly, UNIFE organised and put on an international panel during the PPMC Transport Day on 6 December in Paris (also at UIC Headquarters). This breakout session discussed the contribution of rail in mitigating climate change and included UNIFE Director General, Philippe Citroën as well as speakers from Alstom, Skoda Transportation, Indian Railways, Ethiopian Railways,  and Munich Transport Company and was moderated by the Railway Gazette’s editor-in-chief, Chris Jackson. The session’s main conclusions were that the rail industry and operators have to continue to make rail transport more attractive to end users, while governments need to ensure that rail projects are given a fair share of infrastructure development funds and that they take into account negative externalities of other modes when examining the costs of transport infrastructure development. The session filled the room and the main takeaways of the session were presented by Chris Jackson to the broader Transport Day audience in the afternoon.

UNIFE’s participation in these many events has not only helped highlight how rail is the most environmentally friendly major mode of transport but also in emphasising how the industry is continuing to invest in innovation to boost the energy efficiency and sustainability of its products while at the same time making rail transport more attractive to further elicit a modal shift. The high-level and complex COP21 negotiations are ongoing and will conclude on 11 December hopefully with an agreement. It is then up to the many world governments, industries, and stakeholders to implement action plans to reach emissions targets. UNIFE will continue to assert that rail should be the backbone of sustainable, low-carbon transport strategies.