Following the proposal of the French contractors' association (SETVF) and the EFRTC Board recommendation, the EFRTC General Meeting unanimously elected Mr. Jean-Pierre Bertrand, Executive Vice-President of Colas Rail, as the new EFRTC  President.

UNIFE welcomed this news and congratulates Mr Bertrand on his election. UNIFE looks forward to enhancing our cooperation with EFRTC, an Associate Member of UNIFE. In fact, UNIFE has already held productive discussions with Mr Bertrand to examine how UNIFE and EFRTC can work more closely in the future.

Mr Bertrand began his career in the General Contracting division of SPIE BATIGNOLLES in 1986 where he has worked in construction for the Oil & Gas sector in Africa and the Middle East. In 1992, he joined TECHNIP where he occupied various positions in France and other countries throughout the world. In 2005 he was appointed Deputy Managing Director of SPIE RAIL before being promoted to Managing Director in 2006. After the sale to COLAS in 2007, he was appointed Executive Vice-President of COLAS RAIL when created in 2008. He is also a Director of COLAS RAIL Ltd. He has represented COLAS RAIL in the EFRTC since 2008 and he has been Member of the Board of the French Railway Track Contractors Association (SETVF) since 2014.

Established in 1997, EFRTC (European Federation of Trackworks Contractors) is a Federation of national track-works/constructions’ associations and individual construction companies acting in European countries. It represents almost 100 companies which employs about, 30 000  specialised track-works workforce and produces an average annual turnover at level of  €8 billion only for track-works (excluding materials).

EFRTC members are involved in all major European projects for construction of the new high-speed lines, priority projects for upgrading the EU Trans-European Network (TEN-T), track renewal and maintenance of national networks. Moreover, many of EFRTC companies are not only active in Europe but are involved in railway projects throughout the world including: in South America (Chile, Argentina, Brazil), Asia (Hong-Kong, Vietnam, Taiwan), Africa (Algeria, Morocco, Angola, Mali), USA and Australia.

As an associate member of UNIFE, EFRTC strongly supports the UNIFE policy commitments to the rail development and funding of rail infrastructure. 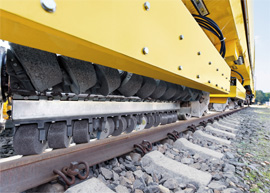