BRUSSELS—On the day of the EU Trade Policy Committee and in the progress review of negotiations on a Free Trade Agreement (FTA) by Member States, the European Rail Industry Association (UNIFE) wishes to reiterate the importance of achieving a level playing field between the EU and Japanese rail markets.

The European Rail Industry has repeatedly stressed that non-tariff barriers continue to hamper access to the Japanese railway market, in particular for rolling stock. As of today, the extensive use of the Operational Safety Clause (OSC) and the non-transparent procurement procedures of operators remain a major hurdle for the majority of European suppliers to access the Japanese rail market.

For the European Rail Industry, the stakes and expectations on the first year of negotiations on a FTA between EU and Japan were high, since both parties sought to agree on a set of concrete measures to guarantee transparency and non-discrimination along the procurement process within the Japanese railway market. Nevertheless, UNIFE believes that the agreement on the One-Year Package on railways procurement following the fifth round of negotiations does not constitute a sufficient guarantee of transparency and non-discrimination treatment on the Japanese rail market.

Moreover, UNIFE strongly supports the Joint Letter sent by the Ministers of France, Germany and Spain, which considers that the One-Year Package is not satisfactory and urges the European Commission to pursue negotiations on some critical parts of the package.

Therefore, UNIFE calls upon the European Commission and Member States to take all necessary actions to ensure that EU suppliers will effectively increase their access to the Japanese rail market.

UNIFE Director General Philippe Citroën stated: “The agreement on the One-Year Package on railways procurement is still a far cry from the expectations of the industry. The European Commission should actively pursue negotiations on rail procurement after the first year of negotiations to achieve a true level playing field between the European and Japanese rail markets and to maintain a strong and dedicated track on rail procurement to ensure that.” 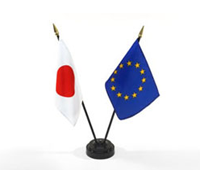