Getting on track: Rail and energy efficient solutions for the EU Green Deal

On 25 February, UNIFE organised a digital event with high level EU officials and sectoral leaders titled "Getting On Track: Rail & Energy Efficient Solutions for the EU Green Deal", focused on the achieving climate neutrality through the joint decarbonisation of the energy and transport sectors. This was the second in a year-long series being held by UNIFE as part of the 2021 European Year of Rail on various topics impacting the European Rail Supply Industry.

Energy production and transport are, respectively, the first and second most polluting European sectors in terms of greenhouse gas (GHG) emissions. Any climate masterplan, such like the one set in the Commission’s Green Deal, requires decarbonising both sectors simultaneously. Thus, the EU transport policy must also be an energy one as well.

The Green Deal’s objectives cannot be reached without transport and energy decarbonisation. Rail – as the most sustainable form of mass transportation - offers solutions for setting both sectors on a low-to-zero-emissions track. Becoming even more energy efficient is a key objective for rail, and the supply industry can decisively contribute to that aim.

Convening a panel composed of representatives from the European Commission, the European Parliament, the European Environment Agency (EEA) and Shift2Rail Joint Undertaking, the discussion focused on how synergies between transport and energy can set both sectors on a path towards decarbonisation. Participants agreed upon the necessity of reaching that target to achieve the Green Deal’s wider climate ambitions and rail’s potentially pivotal role in building such cross-sectorial links that will help both sectors to progressively reach climate neutrality.

Andreas Unterstaller, Transport and Environment Expert, European Environment Agency, stated: ‘’Transport performance of rail increased over the last 25 years, with a decrease of energy consumption and improvement of energy efficiency. While energy from diesel sources have decreased considerably, electrification remains one of the main efficiency drivers’’. Additionally, Mr Unterstaller explained that ‘’Regular monitoring and reporting of the environmental performance of rail would help support policy development’’.

Jakop Dalunde, Member of the European Parliament, TRAN Committee, pointed out: “The European Year of Rail should be an opportunity to accelerate the shift to more efficient modes of transportation from the energy point of view. In this regard, the revision of the Energy Taxation Directive offers a tremendous opportunity to improve the level-playing field in mobility. Fossil fuels subsidies for aviation and shipping should be removed”. Mr. Dalunde highlighted the essential role of the European Railway Agency (ERA) in becoming a real system authority, especially for the ERTMS roll-out.

Richard French, Shift2Rail Joint Undertaking Programme Management and Cross-Cutting Activities Coordinator, Alstom, commented on the work that Shift2Rail Joint Undertaking has carried out “to pave the way towards a true European shared understanding of energy-efficiency in rail”. Among the opportunities to be unlocked by the new Europe’s Rail Joint Undertaking, he discussed: “Traction and onboard energy storage systems and the use of digital energy twins of the infrastructure system integrating models of alternative propulsion systems. Moreover, the work on infrastructure electrification smart grids, substations and overhead lines that manage energy flows, would also be continued”.

Isabelle Vandoorne, Acting Head of Unit “Sustainable and Intelligent Transport”, European Commission (DG MOVE) reflected: “There are very ambitious milestones for sustainability in transport set by the European Commission for 2030 and 2050, with the goal to drive forward an irreversible shift to zero-emission mobility. The revision of Alternative Fuels Infrastructure will be a key pillar of this ambition and rail transport will have a bigger role to play”. She confirmed that a proposal for the revised AFID Directive is to be expected in June 2021.

Philippe Citroën, Director General of UNIFE, concluded: ‘’The examples of sectorial synergies and innovation that we discussed this morning set a clear and promising way forward for making our European rail system more efficient and robust, but also for embracing new technology streams – such as hydrogen trains, improved batteries and increased electrification. Europe’s Rail Joint Undertaking will be an important conduit to developing next generation solutions. National Recovery Plans will be critical in mobilising the resources needed to fuel the necessary research drives and implementation efforts needed to achieve EU Green Deal objectives during and beyond the European Year of Rail’’. 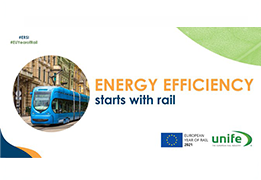