Position Paper: Rail as a key to decarbonising transport

The European Commission has announced, for summer 2016, a Communication on decarbonising the transport sector, thus about reducing greenhouse gas (GHG) emissions from transport operations in the EU. The relevant Roadmap of 7 April 2016 suggests that a key objective will be to present, in a coherent way, the planned EU-level actions and their contribution to transport decarbonisation in 2030, so as to give Member States and other stakeholders an idea of the scale of additional transport actions needed. By proposing a number of key actions, UNIFE and CER wish to contribute to this important initiative.

UNIFE and CER consider the following actions as vital to decarbonise transport:
◦ Develop a reporting mechanism for Member States to monitor and facilitate their progress in reducing transport emissions. Annual reports should be published so as to incentivise Member States to achieve progress.
◦ Confirm in legislation the 60% reduction target for transport emissions by 2050 compared to 1990 levels (Transport White Paper 2011), with an additional binding target for 2030.
◦ Where carbon savings and the economic case of a project are positive, further electrify and upgrade the rail network (regional as well as main lines), as electrified railway transport is by far the most efficient form of e-mobility.
◦ Promote rail as the backbone of sustainable mobility and its interconnectivity with other low-carbon modes, e.g. with bicycle sharing and parking facilities at railway stations.
◦ Support the development and market introduction of energy-efficient solutions and new vehicle concepts like hybrid locomotives and battery-operated vehicles for short sections of track where electrification is not viable.
◦ Encourage the use of electric transportation by fair framework conditions for competing transport modes.
◦ Continue and intensify support to rail research and innovation. 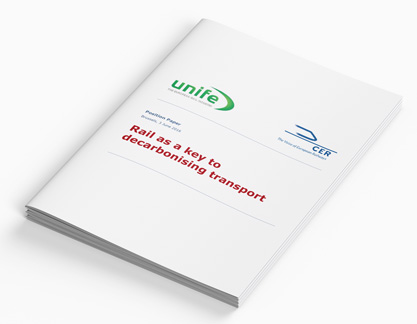