UN CLIMATE SUMMIT: THE EUROPEAN RAIL INDUSTRY ON THE FRONTLINE

NEW YORK CITY—On 23 September, UNIFE, the European Rail Industry Association, participated in the United Nations Climate Summit hosted by UN Secretary General Ban Ki-moon in New York City. The main objectives of the Climate Summit were to catalyse ambitious action from stakeholders and to mobilise the political will for an ambitious legally-binding global climate agreement at the COP 21 in Paris (2015).

120 Heads of government attended the Climate Summit, making it the largest gathering seeking to tackle climate change in history. Among the participants were the European Commission President José Manuel Barroso and Commissioner for Climate Action Connie Hedegaard.

The UN Secretary General asked governments and leaders of industry, business, finance and civil society to put forward new and substantial initiatives that will help the world shift toward a low-carbon economy. The initiatives are clustered under 8 action areas, of which three concern transport-related commitments: transportation, energy and petroleum and industry.

During a dedicated session on transport, several initiatives were unveiled in front of a high-level audience including several Heads of State and Government. UNIFE has pledged to support the following:

On 22 September, UNIFE supported and participated in “On Track to Clean and Green Transport”, a high-level event organized by UIC, Amtrak, UN-DESA and SLoCaT in Moynihan Station in New York City. Gathering heads of railway companies worldwide, representatives of international organisations and the world of diplomacy, this meeting discussed the potential development of sustainable transport in the future and the role it can play in fighting climate change. The event was attended by around 100 participants from all over the world, among whom Joseph Boardman, President and CEO of Amtrak; Thomas Prendergast, Chair and CEO of VIA Rail Canada; Jean-Pierre Loubinoux, UIC Director General; and Laurence Tubiana, Special Representative for the 2015 Paris Climate Conference from the French Ministry of Foreign Affairs.

During the morning session in particular, participants examined the role of railways in achieving a more sustainable transport system and in tackling climate change related challenges. Jérôme Wallut, President of Alstom Transport Inc., represented UNIFE and enhanced the role of rail as the backbone of a sustainable transport system in a panel session on the rail industry sector. The conclusions of the event contributed to the discussions during the UN Secretary General’s Climate Summit held the following day.

Regarding the UN Climate Summit, UNIFE Director General Philippe Citroën stated: “There is now clear momentum for sustainable transport in the UNFCCC process. Rail transport policies and technologies have already proven their mitigation potential and the Climate Summit is a unique opportunity to scale up the initiatives towards the COP 21 in Paris. The European Rail Industry is fully committed to pursue and intensify its efforts to provide more energy efficient and environmental-friendly products.” 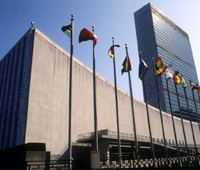