In the context of the 11th Round of EU-Japan Free Trade Negotiations, UNIFE promotes fair market access for European rail suppliers on Japanese Market

On the occasion of the 9th UIC World Congress on High Speed Rail in Tokyo, and with the 11th round of negotiations of the EU-Japan Free Trade Agreement currently ongoing in Brussels, UNIFE hosted a reception for senior representatives of European rail equipment suppliers and Japanese railway undertakings at the EU Delegation to Japan in Tokyo.

The 11th round of negotiations of the EU-Japan Free Trade Agreement (FTA) are being held this week (6-10 July) in Brussels and UNIFE continues to advocate for an FTA that delivers increased market access for European suppliers and that addresses crucial non-tariff barriers such as the Operational Safety Clause.

The Ambassador of the European Union to Japan, H.E. Viorel Isticioaia-Budura, welcomed the guests and gave the opening speech, stating “When I look at today's reception, I see the willingness from both the European and the Japanese side to indeed engage in deepening our cooperation, in fostering business opportunities and thereby enhancing our common prosperity.”

UNIFE Director-General, Mr Philippe Citroën addressed UNIFE’s expectation that the Japanese railway companies would need to make greater efforts that result in significant, concrete contracts for EU companies, stating: “For UNIFE and its members, the question of market access currently addressed in the EU-Japan Free Trade Agreement negotiations is absolutely essential. We believe these negotiations should strive to create a level-playing field in terms of access to both of our respective rail markets.”

Assistant Vice-Minister for International Affairs of the Japanese Ministry of Land, Infrastructure, Transport and Tourism, Ms Yuri Furusawa, thanked the attendees and reiterated how Japanese and European leaders are intent on finding an agreement to the FTA negotiations by the end of this year, and commented, “I firmly believe that the deeper understanding and relationship among the industries of Japan and the EU, will promise us a successful agreement, and will lead to a stronger relationship between Japan and the EU.”

JR East Executive Director and CFO, Mr Yuri Morimoto, toasted the attendees and remarked, "Taking this opportunity of today's conference, I strongly hope communication between the two sides would become more active, leading in near future to bear fruits in the form of concrete transaction as well as joint projects."

European Railway Agency Executive Director, Mr Josef Doppelbauer, discussed the need to tackle standardisation and interoperability challenges to support the successful exchange between the EU and Japan on railways, adding, “Working together between Japan and Europe means that we have to meet each other on a level playing field. There, I am ready to offer the support of ERA, in order to achieve mutual understanding, both in terms of technical requirements and standards, but also in terms of processes related to safety.” 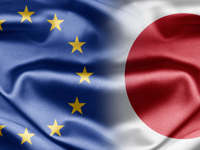