BERLIN—Despite low economic growth and public deficit problems in several important countries, the world rail supply industry steadily grew at approximately 1.5% per annum in the period from 2011 to 2013, according to the 2014 UNIFE World Rail Market Study released today at InnoTrans. The study, conducted by Roland Berger Strategy Consultants and based on trends and future orders, expects the annual growth of the industry to increase to 2.7% per year over the next six yea

Lutz Bertling, President of Bombardier Transportation and Chairman of UNIFE, announced the study at InnoTrans, stating, “The demand for rail products continues to be resilient in a difficult economy—the expected year over year growth of 2.7% until 2020 reflects the growing need for sustainable mobility. Global trends like an increasingly urbanised world population will create further needs for modern mobility solutions thus ensuring a long-term prosperous future for our industry.”

The study details that the regional markets with the highest growth rates over the next six years are Latin America, Asia/Pacific, and NAFTA, this is driven by major investments in rail projects in Brazil, Colombia, China, and the U.S. The Africa/Middle East region is expected to maintain its current high market level in the upcoming years. The total world market will amount to approximately €176 billion per year by 2017-2019.

Philippe Citroën, Director General of UNIFE, commented, “European industry is still the predominant player in the global rail supply market, in fact, the manufacturing of rail supplies is one of the few sectors where Europe is still in a leadership position. We expect this trend to continue as the European industry continues to invest in innovation. I am confident that a number of initiatives being developed at EU level, like Shift2Rail, the Connecting Europe Facility and the adoption of the Fourth Railway Package, will give a further boost to the rail market in the near future.”

The 2014 edition of the UNIFE World Rail Market Study is the fifth edition of the study which has been published biennially since 2006. The study provides a comprehensive overview and key insights on all relevant developments in the rail supply market. This edition takes an especially deep dive into two global rail markets: the U.S. and Russia, to provide readers with a nuanced picture of these large absolute markets that are important growth areas for the broader industry. "Moreover, the study dedicates a section to alternative financing methods which will be of increased importance to rail industry players" states Andreas Schwilling, Partner of Roland Berger Strategy Consultants. "Reasons for this are the growing demand for rail systems along with scarce public funds as well as the increased efficiency induced by the private sector." The study is published by the DVV Media Group.

For more information and to order the study, please go to: http://www.eurailpress.de/wrms. 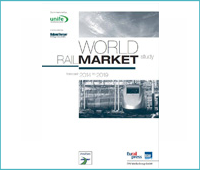