European rail supply industry leaders gathered yesterday evening at the Representation of the State of Hessen to the European Union in Brussels with senior European officials and leaders from the Hessen Land government to discuss an ambitious future Resolution of the European Parliament’s Industry, Research and Industry (ITRE) Committee on the competitiveness of the European rail supply industry. In total, over 200 guests attended this high-level event hosted by the Hessen government, UNIFE (the European Rail Industry Association), and with the support of MEP Martina Werner (ITRE Committee Rapporteur for the Resolution) to listen and participate in the dialogue on how to best maintain the world leadership of the global market for rail supplies for this strategic European industry. Due to increased competition coming out of Asia, it has become clear that the European rail supply industry will need to work together with EU leaders to enhance its global competitiveness and ensure fair market conditions for its products in both the home European market and abroad.

The opening session included a presentation of the European rail supply industry and its challenges and opportunities by Dr Lutz Bertling, Chairman of UNIFE (the European Rail Industry Association) and President of Bombardier Transportation, as well as a keynote address from Ms Martina Werner, German MEP and the Rapporteur for the proposed ITRE committee Resolution on the Competitiveness of European rail supply industry. Following the opening speeches, a moderated discussion panel that included Mr Olivier Onidi, Director of the European Mobility Network in the European Commission’s DG-MOVE, Mr Didier Herbert, Acting Director of Competitiveness and the European Semester at the European Commission’s DG-GROW, Dr Lutz Bertling, President of Bombardier Transportation and UNIFE Chairman, Mr Miroslav Fukan, Executive Director of Oltis Group and Chairman of the UNIFE SME Committee, and Mr Johannes Hauber, Chair of the Railway Equipment Manufacturing Working Group for IndustriAll (the European Trade Union Association). After the panel discussion, Mr Mark Weinmeister, Secretary of State for European Affairs of the State of Hessen, thanked the guests for attending and delivered some concluding remarks.

The speakers highlighted the need for both the industry and European leaders to act quickly and take measures to strengthen the industry by fostering research and innovation in rail, improving the skills and training of the rail supply work force, enhancing the internal EU market for rail supplies, ensuring fair market access to European rail suppliers abroad and boosting export potential, improving the business environment for rail supply SMEs, and stimulating the demand for rail projects domestically and abroad through pro-rail policies, financial instruments and funds.

Dr Lutz Bertling, Chairman of UNIFE and President of Bombardier Transportation, gave an overview of the rail supply industry and emphasised its importance to the European economy as well as the competitive threats it is facing, and added, “With a history of more than 175 years, the rail supply industry is a backbone to European industrialisation and economic development. It has catered to European integration by connecting European states and citizens in an environmentally friendly way. Today, our industry is more dynamic, innovative and important to the European economy than ever before. We are now at a pivotal moment where the industrial competition from Asia, and especially China and Japan, is becoming increasingly intense. As such, UNIFE particularly welcomes the decision of the European Parliament’s ITRE Committee to prepare an official Resolution on the competitiveness of European rail supply manufacturers.”

Ms Martina Werner, Member of the European Parliament and rapporteur for the ITRE Committee’s Resolution on the Competitiveness of the European rail supply industry, stated, “If we want to ensure the long-term competitiveness of the rail supply industry, we need to think more European. This concerns all actors: companies, operators, politicians. We should concentrate on investments in sustainable and interoperable technologies as well as in rail infrastructure and on cooperation of stakeholders, where cooperation has an added value.”

Mr Mark Weinmeister, Secretary of State for European Affairs of the State of Hessen, concluded the event and commented, “The railway supply industry forms an important industrial sector for Hessen, with railway engines being constructed in Kassel since 1848. The Commission should support the industrial sector with the same emphasis as it promotes the freedom of services for consumers and it should particularly have an eye on better framework conditions for manufacturing enterprises.” 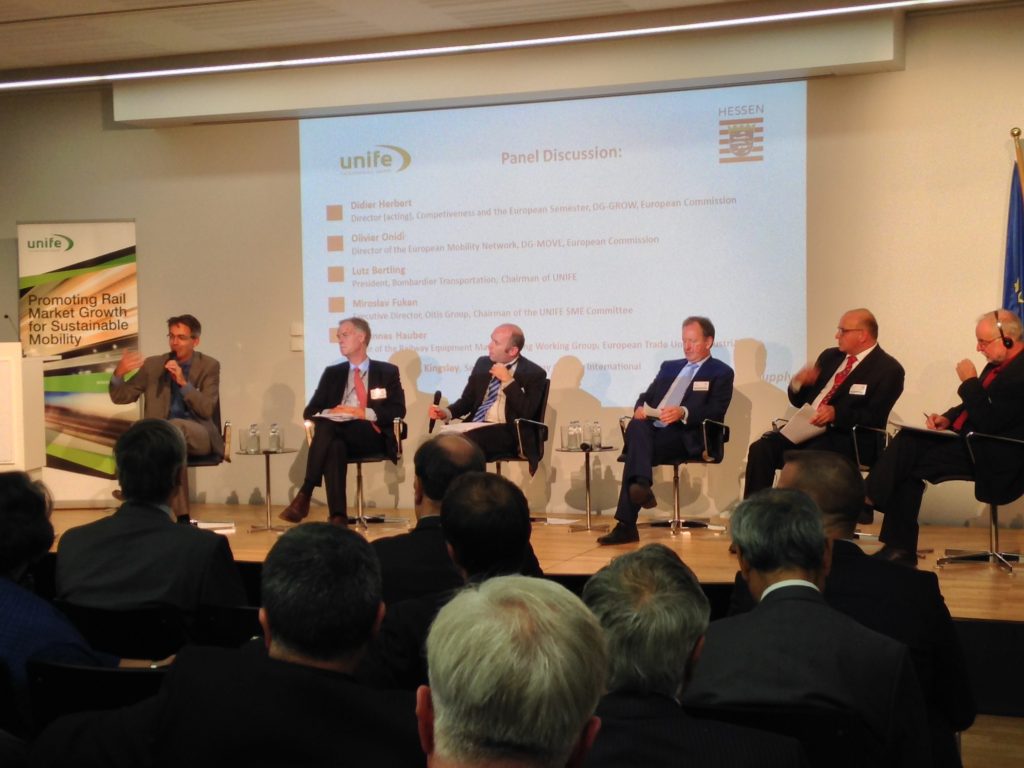