The European Railway Award 2015 was presented today to Lord Andrew Adonis, former Secretary of State for Transport in the UK (2009-2010), and to industrial designer Alexander Neumeister. Since 2007 the European rail sector has celebrated and recognised personalities in the political and technical field. The ceremony, which took place at the Musées Royaux D’Art et Histoire in Brussels, was followed by the joint CER-UNIFE Annual Reception and attracted more than 500 guests from all over Europe, including high-level politicians and transport stakeholders.

Keynote speaker of the gala evening was the recently appointed European Commissioner for transport, Violeta Bulc, who congratulated the winners and reflected on her work as Transport Commissioner to improve rail transport, remarking, “Rail is an essential part of my vision of transport for next five years. The adoption of the Fourth Railway Package is my main priority for that sector. It should finally ensure stability of the regulatory framework as there will not be any ‘Fifth Railway Package’ if the fourth one as adopted by Council and European Parliament is sufficiently ambitious.”

Latvia´s Minister of Transport Andrijs Matīss presented the plans of the Latvian Presidency for the next six months. He highlighted: “Rail transportation and, in particular, rail freight services […] play a vital role in Latvian economy. We, therefore, strongly believe that the railway sector has a crucial role to play in ensuring the competitiveness and growth of the Union.” 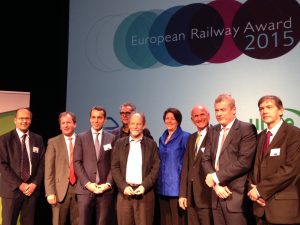 Representing the European Parliament, MEP Michael Cramer (Greens/EFA, DE), Chairman of the Committee on Transport and Tourism, addressed the work of his Committee on rail transport under his leadership and commented: “The European Railway Award puts the spotlight on the most environmentally-friendly mode of transport. It shows that we should not be shy in communicating how attractive, comfortable and sustainable travelling by train can be!”

CER Chairman and CEO of ÖBB Christian Kern commented: "We need new and forward-thinking railway policies for the next four years. A way forward means investments in infrastructure, pushing the Technical Pillar of the Fourth Railway Package, reducing costs and increasing the quality of customer services. And we need the European railway sector as a major backbone of European growth and jobs: the 2.3 million employees and 142 Billion Euro - a 1.1% contribution to the European Gross Domestic Product – speak for themselves.”

UNIFE Chairman and President of Bombardier Transportation, Lutz Bertling, congratulated the laureates and took the opportunity to emphasise the importance of the Technical Pillar of the Fourth Railway Package, stating that, “it will lead to more efficient and less costly authorisation procedures, providing railway operators and European citizens with new vehicles in a quicker and more predictable manner. It is the cornerstone of the Single European Railway Area and it will help create the strong home market that the European rail industry needs to maintain its world leadership.”

As UK Secretary of State for Transport, Political Award winner Lord Andrew Adonis spearheaded the plan for High Speed 2, the proposed high-speed railway line from London to Birmingham and the north of England—which was adopted and by the British Government in 2010. He was also a key leader in promoting the electrification of railways throughout the UK. Under his leadership in the Ministry for Transport, the British rail system has improved extensively as a result of his many initiatives in high speed and mainline electrification. Moreover, he played a key role in the development of the National Skills Academy for Railway Engineering.

Jochen Eickholt, CEO of Siemens Mobility Division, gave the laudatory speech for Lord Andrew Adonis. When accepting the award, Lord Adonis commented: “Policy on high speed rail in the UK has been revolutionised in the last five years, drawing on the success of high-speed rail in continental Europe and Asia. HS2 and HS3 are set to become the biggest infrastructure projects in Europe and their impact is driving positive assessments of high-speed rail more widely across Europe, Asia and the United States. I’m delighted and privileged to have played a part in bringing about this fundamental change, which will also help to create far more effective, trans-European transport networks built around state-of-the-art rail systems.”

The laureate for the Technical Award 2015, Alexander Neumeister, is one of the most renowned industrial designers worldwide. Some of his famous designs include the German ICE-3 high-speed trains, the MagLev trains ‘Transrapid’, the Japanese ‘Shinkansen 500 Nozomi’, the German DMU trains ‘Talent’ and ‘Desiro’ or the C1 and C2 train-generations of the Munich subway.

The laudatory speech for Alexander Neumeister was given by Pablo Vázquez Vega, President of Renfe Operadora. When accepting his award, Alexander Neumeister remarked, “For nearly 45 years I have been designing trains! And still today, I see no other means of transport - be it private-cars, buses or airplanes, which combine so many positive factors - so many ‘unique points of sale’ - so to say.”

Each award is accompanied by a donation of €10.000 to the charity of the laureate’s choice. Lord Andrew Adonis gave the prize money to Teach First, and Alexander Neumeister gave his to the Mia Seeger Foundation. 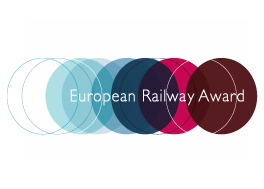